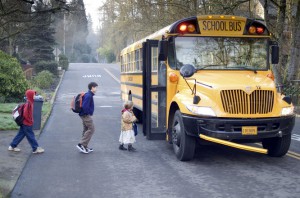 Seven people are recovering from injuries sustained in a school bus accident in Virginia Beach. Police say the February 12, 2018 collision occurred around 2 PM at the intersection of South Independence Blvd. and Edwin Drive, near Mount Trashmore.

While it is unclear what caused the incident, we do know that four children, the bus driver and two drivers from other vehicles were hurt in the collision. All seven were hospitalized with minor injuries. Virginia Beach Public Schools confirmed that the students were members of SECEP, the Southeastern Cooperative Educational Program. Police reopened roads around 4 PM. No charges have been filed at this point.

School buses are engineered to be as safe as possible. Though the vehicles do not have seat belts, they are among the safest of vehicles on the road. Made of heavy metal and glass, school buses can sustain serious outer damage with relatively little impact on the inside of the vehicle. Cars that collide with school buses are often not as lucky. Depending upon the cause of this crash, the students, bus driver or drivers of the other two vehicles could have reason to pursue a personal injury lawsuit.

South Independence is one of the most heavily traveled streets in Hampton Roads. With speeds ranging dramatically depending upon the section of the road, Independence can be a hotspot for dangerous wrecks. It is amazing that more vehicles were not involved in this wreck. Parents of the injured children may want to speak with a Virginia car accident lawyer to understand their rights following the accident.

The Law Offices of Richard J. Serpe, PC has dealt with the insurance companies for over 30 years.  We will deal with the complicated legal and insurance issues so that you can focus on getting better. Setup a consultation to discuss your rights.