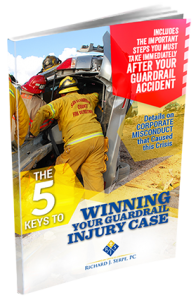 Dangerous hidden guardrail design could be responsible for serious and fatal injuries in guardrail related accidents.

The Law Offices of Richard J. Serpe, P.C. are currently investigating potential lawsuits for people that were seriously or fatally injured in an accident which involved a guardrail.

Trinity Industries has come under fire recently after after information surfaced scrutinizing the safety of the ET-Plus guardrail terminals found on many of our nation’s highways. The guardrails in question are designed to split upon impact and peel away as vehicles crash through them, ultimately slowing accidents to a stop. Instead, the guardrail heads pierce right through the oncoming cars, often slicing through the cabins. Several people have been seriously and fatally injured in accidents involving the malfunctioning guardrail.

Many of these guardrail accidents resulted in serious injuries including:

$175 Million Awarded to Whistleblower that Discovered the "Cover Up"

A Virginia man, Josh Harman, blew the whistle on the company after discovering that they made design modifications to the ET-Plus highway guardrails without notifying the Federal Highway Administration. Recently, a federal jury sided with the whistleblower stating that Trinity Industries, Inc. made false claims to federal regulators when it changed its design in 2005. This means that the modified guardrails were never approved, nor did they go through proper crash testing.

Many States Have Suspended Use of Controversial Guardrail, Number Will Rise

The ET-Plus Trinity guardrail is one of the most commonly used guardrails on America's highways. Many states have suspended the use of the controversial guardrail while investigations are underway to see if these guardrails contributed to serious or fatal injuries.

Injured in An Accident Involving a Guardrail?


If you were in an accident that involved a guardrail, you may want to consult an attorney. Our office is currently investigating these cases and are available to speak with you about your accident. We offer free case evaluations, and also have a no fee promise which means if you retain us you pay no legal fees unless we settle or win your case.